Well, only one week off, but feels like a lot more – win!

I finished work a bit early on the Friday to go to the dentist to get my temporary filling removed and replaced. That went smoothly, although I did then have to greet my sister in law, Ali, newly arrived from the states, with a numb mouth..

Friday evening we all went down to my inlaws and gave my father in law a nice surprise as he had no idea Ali and her kids were coming over for his 70th birthday party.

Saturday was the party, and in the morning while we waited for the party to start I spent some time playing with their lovely black lab, a beautifully docile and loving dog, so I love the photo below, taken as she was leaping to catch a ball :

Party time arrived and the two kegs of beer I’d brewed and brought along went down well, the weather was lovely, and it was great to see all the family there and catch up with folk.

Sunday we helped tidy the place up, and in the evening we headed home.

Monday morning was a bit hectic – the Mrs was away to work and I was left to pack for me and the 3 kids for a weeklong trip up to Aberdeen, including camping and snorkelling gear. We drove up to Aberdeen that afternoon.

We had a lazy day with our friends on the Tuesday, set up a big bonfire in one of their fields to burn off loads of garden rubbish and paperwork. It was rather hotter than I’d have liked for a bonfire, still, the kids love a good fire!

The kids did some horseriding, and Rory fell off, uninjured though. 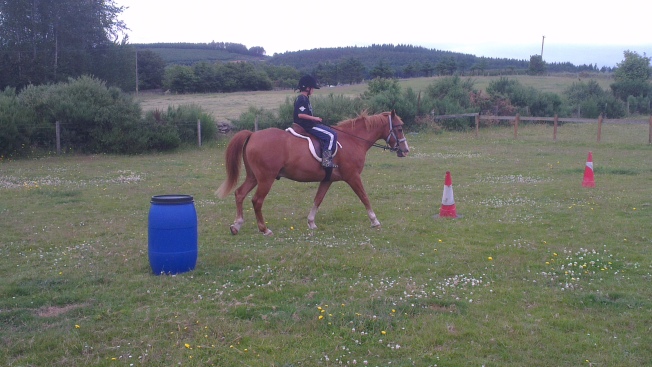 Wednesday we packed all the camping gear into the cars and headed up north to the Moray coast. We went to explore a beach near Cullen, and explored Findlater castle – a long derelict castle, abandoned in the 1800’s, and now in a rather unstable condition, perched on the edge of sea cliffs… perfect to let 5 kids explore!! 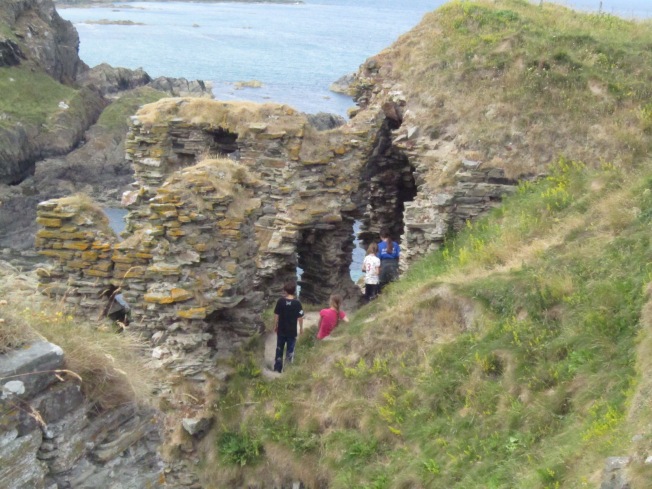 After we hauled them back out of there they all agreed the beach was too busy, and had a terrible lack of firewood, so we walked back to the cars and headed off to a beach near New Aberdour that we camped on last year.

We humped all the kit into the beach and then emptied the rucksacks and headed off to collect firewood – it’s a bit of a walk, but with 6 big backpacks between us, we brought back loads of bone dry driftwood and soon had a big fire going.

We spent 3 days/2 nights there – swimming, snorkelling, exploring rock pools and generally enjoying the beach. And it was hot. Damned hot! Suddenly swimming in the north sea became very appealing! 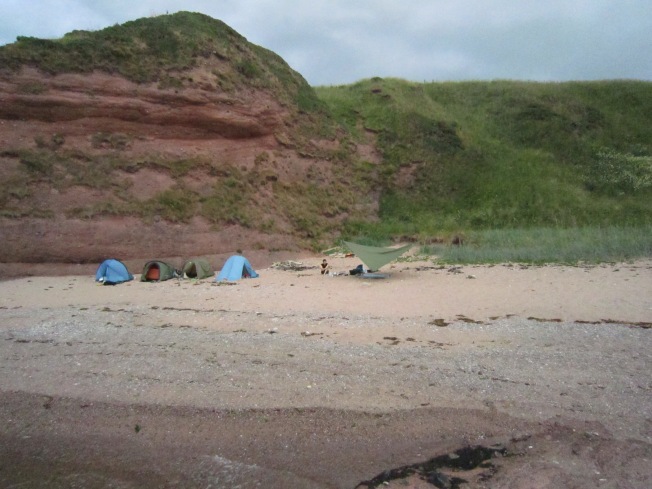 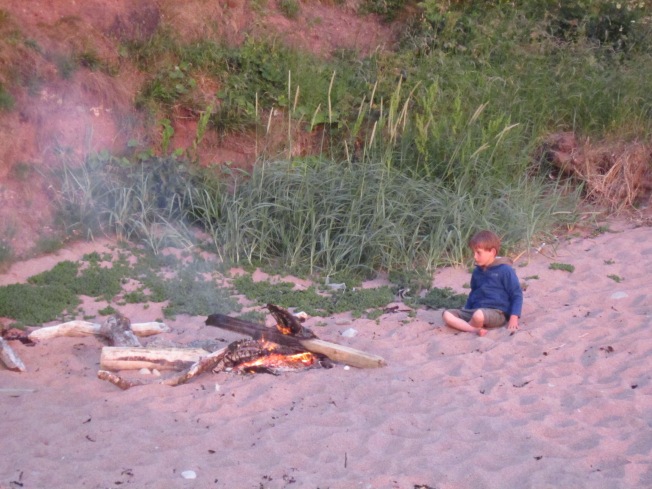 We came back to Aberdeen on the Friday evening, and Saturday while the kids were saddling up horses I got to fix and then play with a big petrol driven strimmer – I’m quite sure the novelty would wear off soon, but the devastation this thing swept before it was awesome compared to weedy little electric strimmers. Then the kids got out for some more riding, this time it was one of our friend’s kids who came off – her horse got a bit too excited after some galloping and bucked her off – seems she’s rather used to this!! 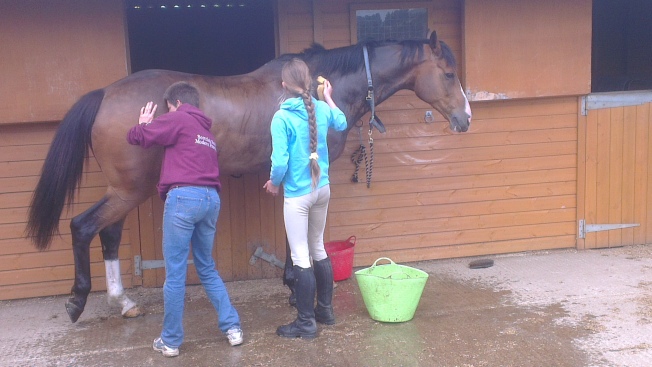 After that it was an afternoon of geocaching in the woods and hills near them – I’m always amazed at the energy kids have – while we trudged up the hills in the heat, they were belting around playing games and generally having a ball. 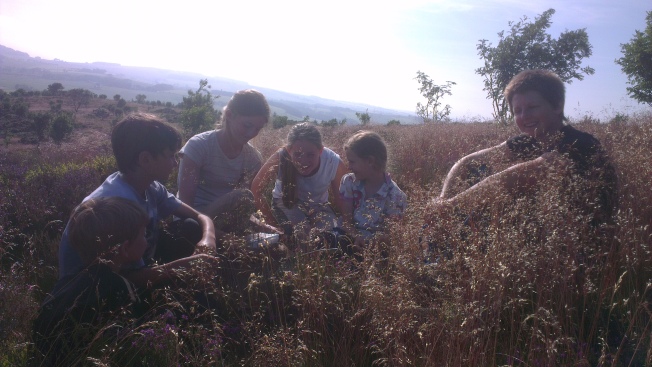 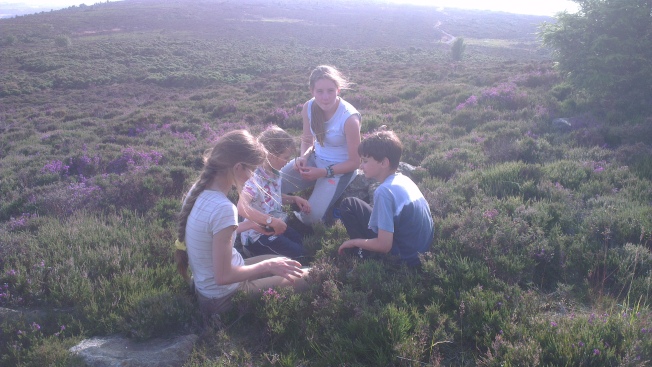 That obviously didn’t tire the kids out – while I was indoors busy packing up all the gear for the return home I was called outside to witness some barrel rolling antics! 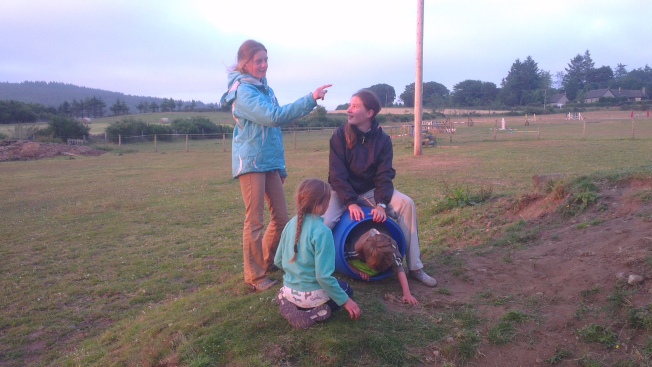 We came home the next day.

As usual, the main test of the week’s success is whether the kids want to come home – especially as Mum had been at home all week – even Rory, age 6, didn’t want to go home at all, in fact they were all in a rather sullen mood when we did get home, and instead of being pleased to see Mum, their faces were all tripping them! I call that a success 🙂