June 2012
Since getting my bike in April of this year I’d really only been commuting on it, and this was to be my first proper bike trip since I sold my last bike way back in the 90’s

I still had my old Oxford soft panniers, and I managed to source a sports rack for my bike – although it first of all needed all the old paint and a load of rust removed, followed by a wee spot of welding, and finally a lot of painting before it was going to be of any use.

My mate Alan did the welding for me. 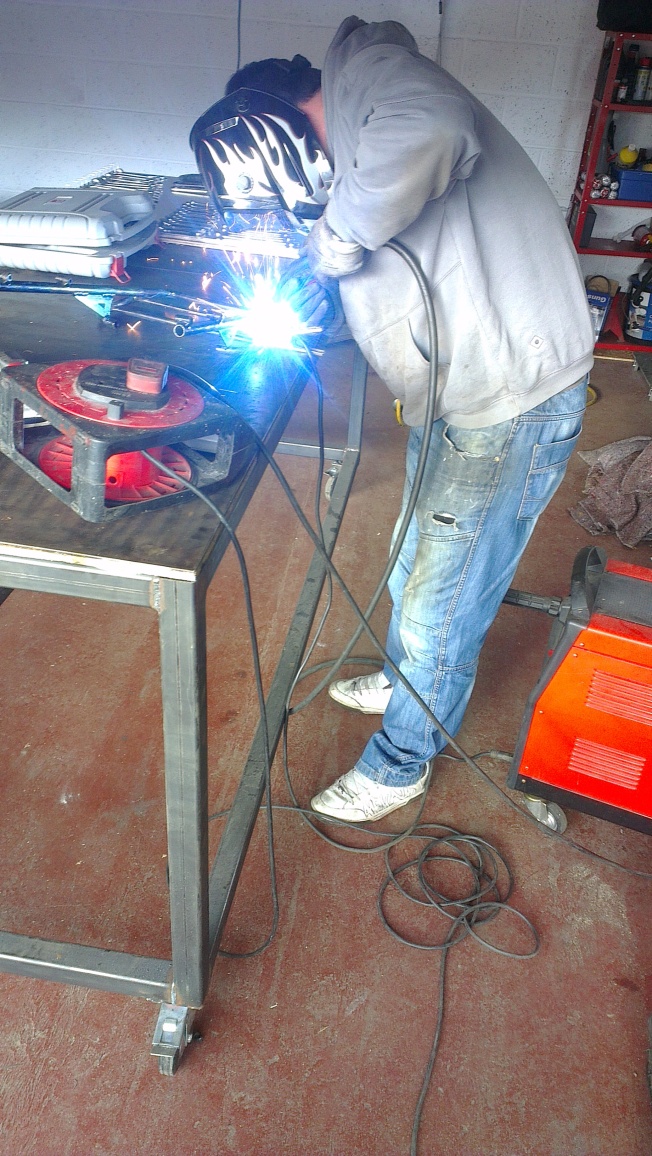 All painted up and finally on the bike. 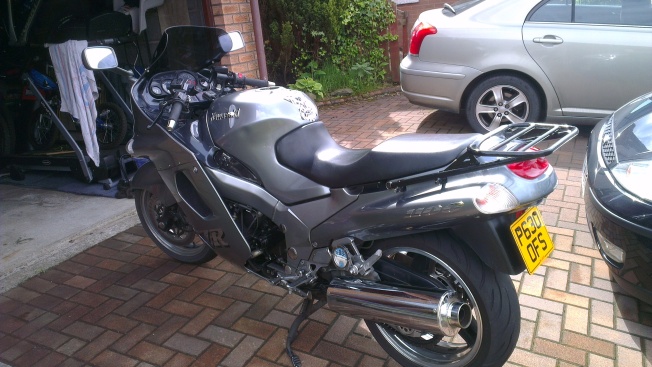 After much faffing, wondering what to take, what to leave behind, I was finally packed up and ready to go. 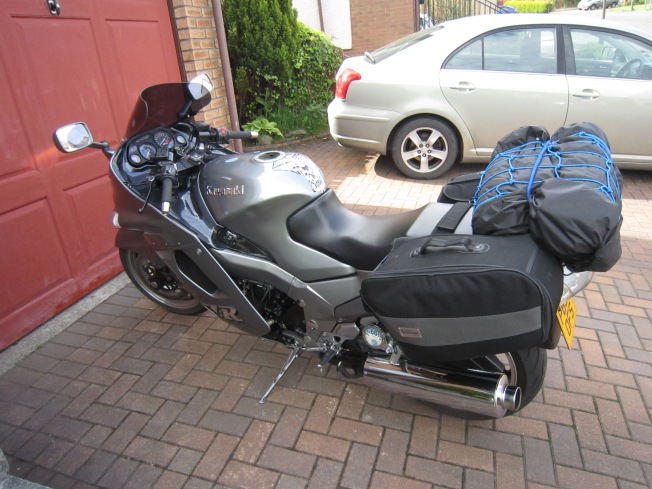 We met up at the Stirling services and then headed across to Arrochar. My primary concern was how happy/safe I’d be riding in a group. I needn’t have worried – the chaps I was riding with were all proper gents on their bikes and it all worked very nicely.

So, 5 of us – myself, Bruce, his Dad, Bruce Snr, Big Colin, and Dave, all headed across towards Loch Lomond, then across to Arrochar, where we met up with another Dave,’Old’ Dave, at the famous Pit Stop.
Here, while reviewing maps, it became apparent that Old Dave had managed to book a B&B in entirely the wrong place! He decided he’d accompany us all to Tayvallich, then make his way back to his B&B, and head home himself the following day.

The road to Tayvallich was, on the whole, awsome – along the A93 to Inverary, and then along the A819 towards Loch Awe and Oban.

Now, at this point, it had been decided we’d take the B840, which runs down the east side of Loch Awe. What a mistake that turned out to be! Single track, blind corners, blind rises, and the Roads Dept had done there special trick of renewing the road surface, then covering it in loose gravel… this had built up into deep ridges, leaving a tiny, thin line of usable road… It was a nightmare… I know that by the end of that road, I wasn’t the only one to have thought ‘Oh Shit! This is it!’

We rode on into Lochgilphead to stock up on essentials (beer, crisps, square sausage, rolls, more beer) before making our way to Tayvallich on the tiny little B8025, which to my utter horror, had also been visited by the gravel fairies….

When we finally arrived at Tayvallich the first job was to get the tents up. Looking at the size of Bruce’s, Colin’s, and dave’s tents, I was amazed they managed to fit it all on their bikes! 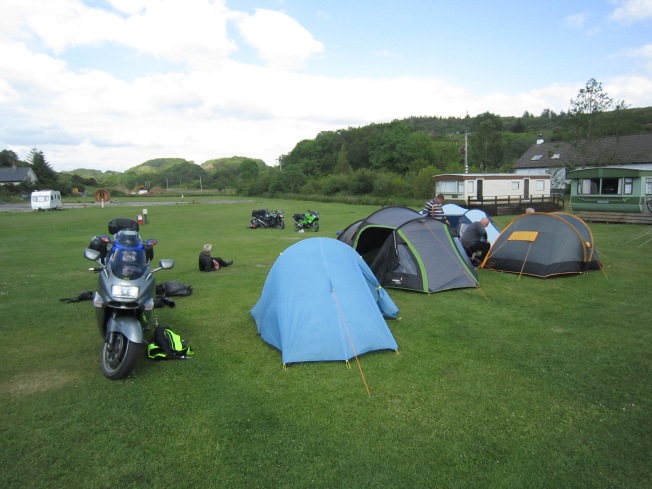 We had the camping space largely to ourselves – well, it was a Thursday! 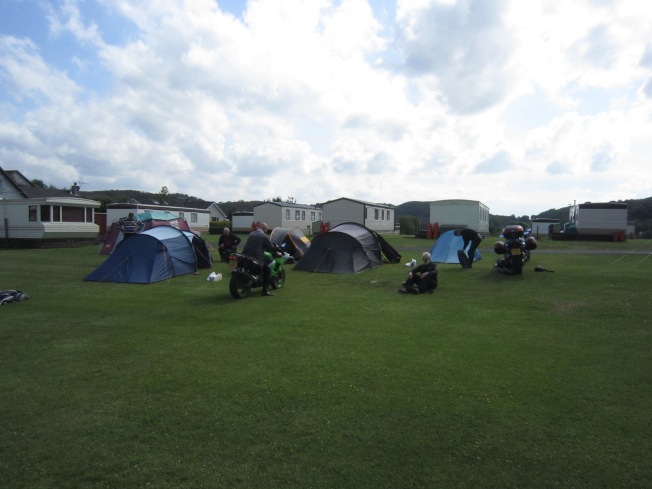 My bike seems to be bigger than my wee tent! 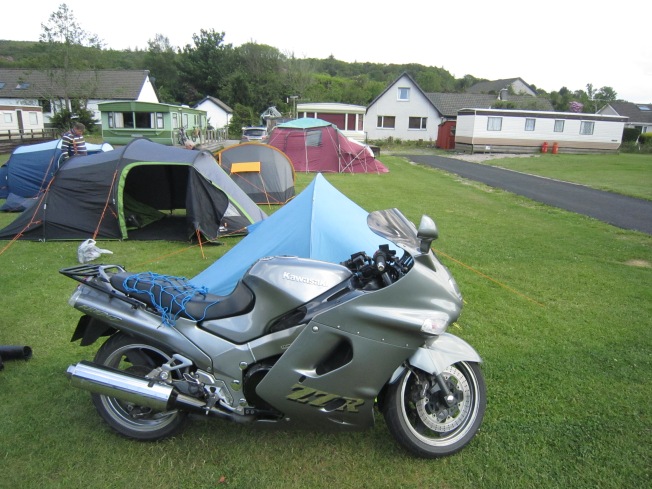 It was lovely and sunny, and ‘Old Dave’ made full use of the opportunity to relax while we faffed about with tents. 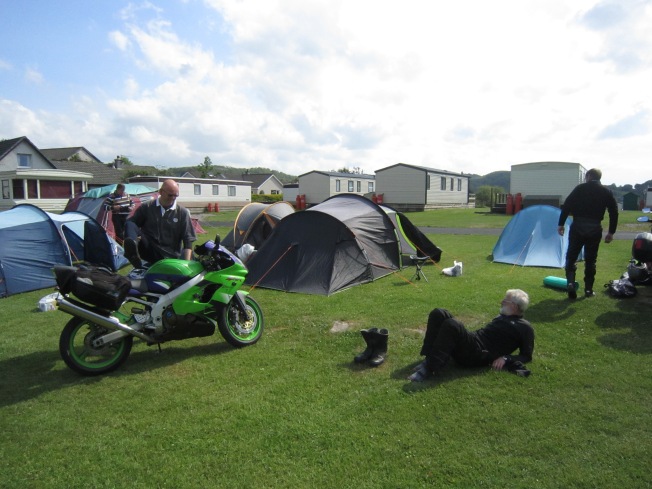 After a lovely meal at the Tayvallich Inn Bruce Snr was heading home – camping is definately not his thing – and ‘Old Dave’ was heading off to his B&B. 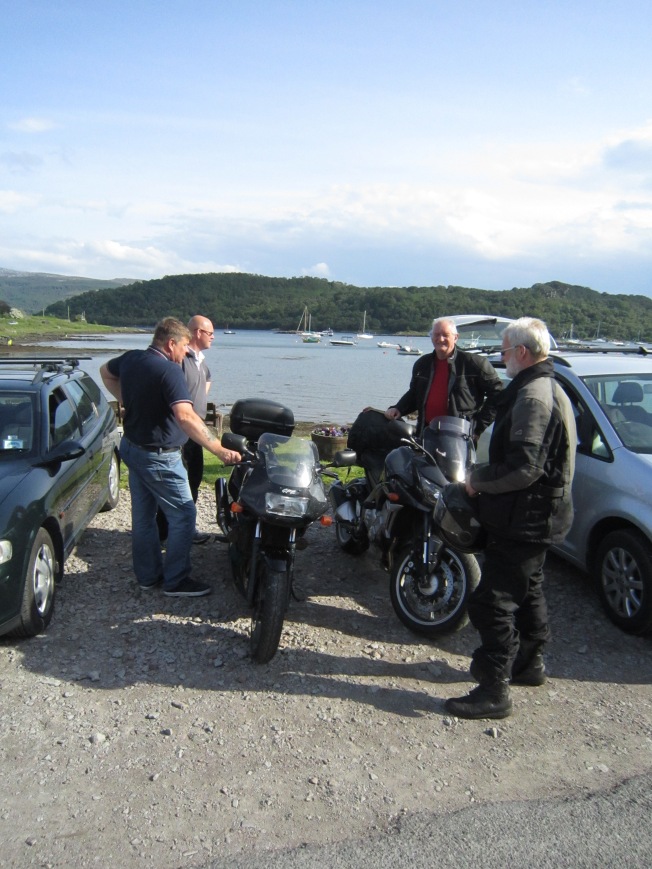 That left Dave, Bruce, Colin and me to enjoy the beer and good chat for the rest of the evening. 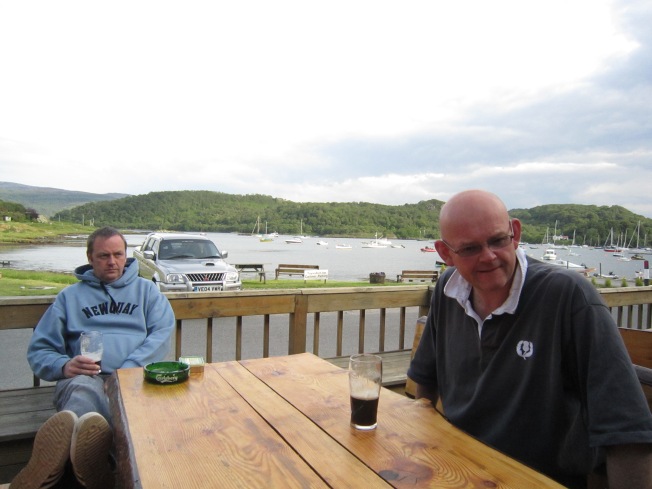 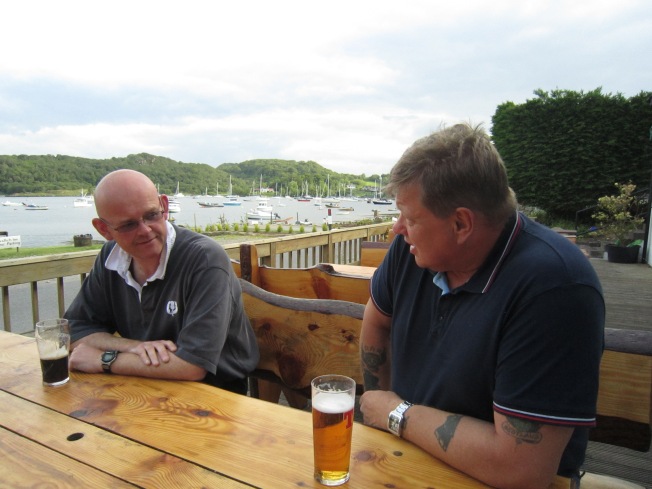 I learnt a few things –
That I was riding the bike more like a car, than a bike, when it came to the lines I was taking around corners.
That age and speed are unrelated – ‘Old dave’ was the fastest man there!
That my ZZR is HUGELY fast on the straights, but I was bricking it when it came to the corners.

Eventually it was closing time at the Inn, so time to head back to the tents and get the kettle on. 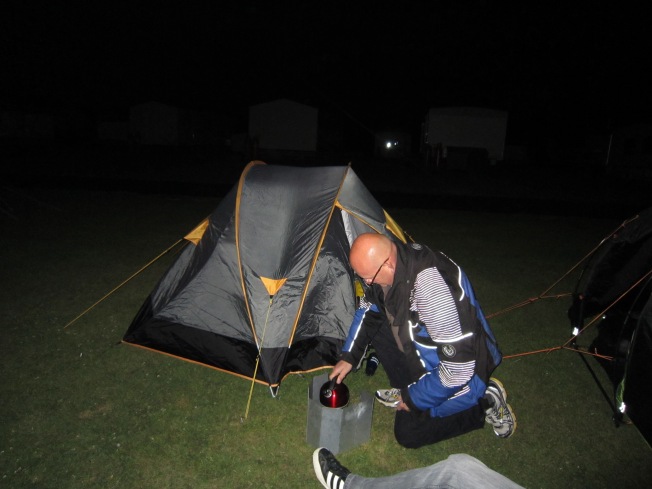 Bruce and Dave enjoy a cuppa.

We all crawled into our respective tents, and fell asleep to the noise of the gathering wind…
Sometime around 5am I woke up in the dawn light, and needing to pay a visit to the gents I emerged into the windy and wet world to discover Dave fighting with his tent, which had broken a pole in the wind, dumping a load of cold canvas onto his face as he slept!

Breakfast was a rather cold and damp affair, cooking up the square sausage in the lee of the shower block, while the wind tore through the site with ever more ferocity. 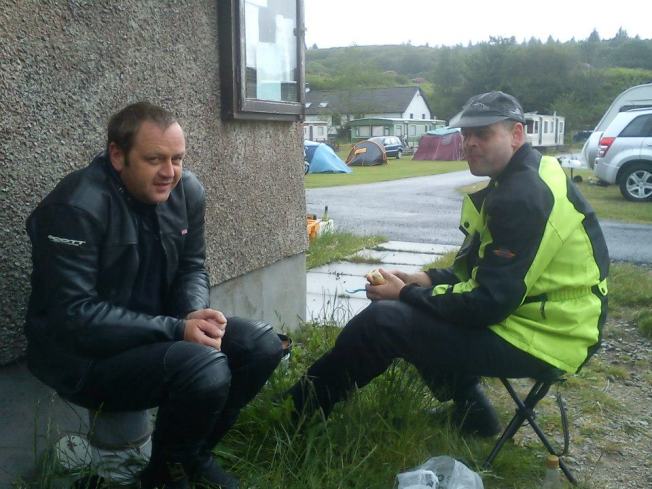 With the damp tents all packed up and bungeed onto the bikes, we huddled in the shower block, hoping the wind and rain would ease off.. It didn’t!

We set off gingerly, back up the gravel laden road, and finally out onto the A816 and north to Oban, and on to Glencoe where we stopped for lunch. 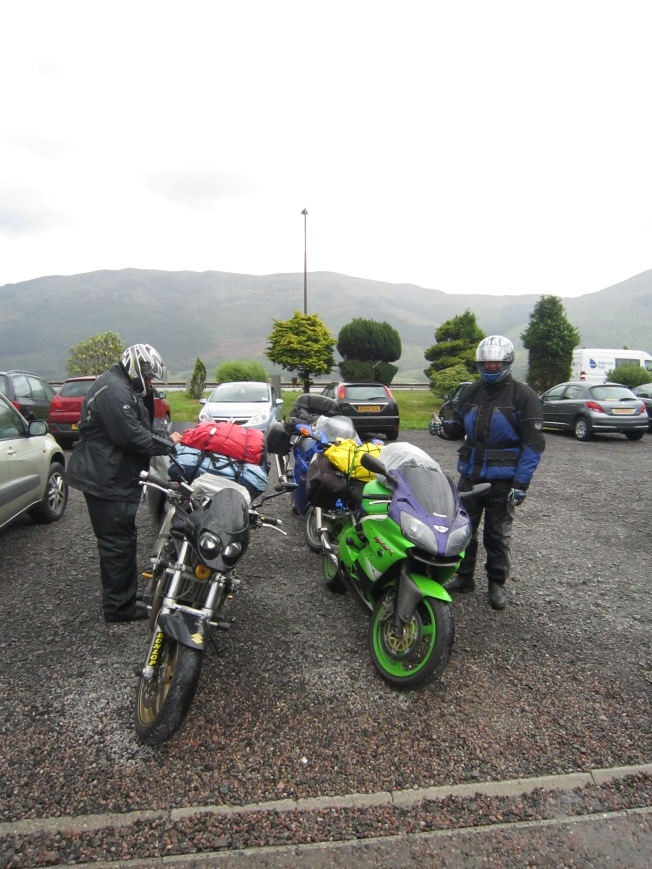 After lunch, it was time to head through Glencoe – a road that I’d longed to ride my new bike through – only today it was horrendous – I had NO confidence, and the buffeting from the wind felt like it was trying to scoop the bike out from under me.

Just how confidence sapping that was, was nicely demonstrated by a white transit van overtaking us.. sorry gents!!!

Eventually we reached more sheltered roads and stopped to fuel the bikes at the Lix Toll garage. 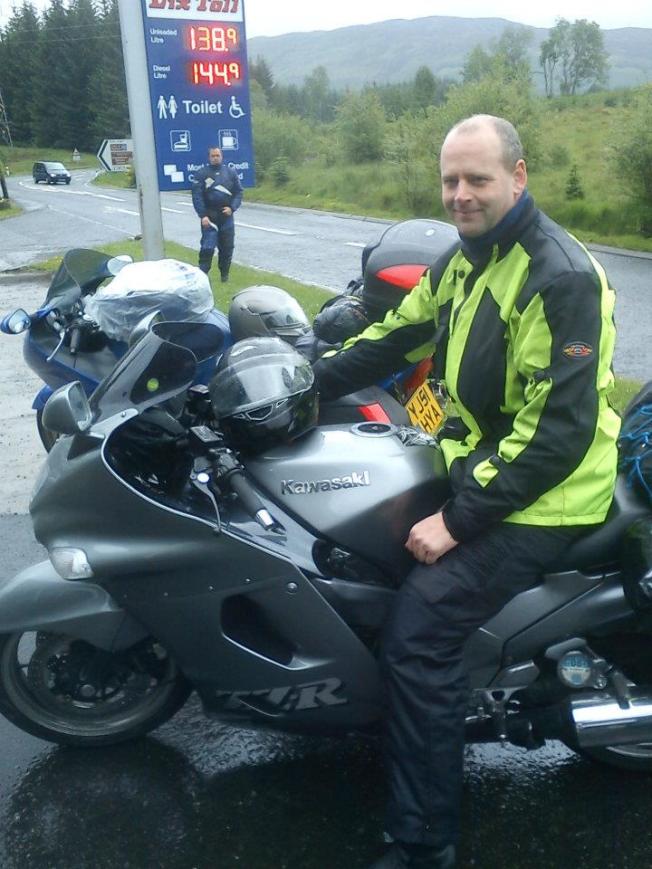 After that, it was the run home, and I followed Dave on his Blackbird, following his smooth lines through the corners, and despite the wet, I started to feel a lot more confident!

Subsequent to this trip, I changed a few things on the bike – MUCH better tyres, replaced the fork oil seals and put 20w fork oil in to stiffen the front up, and did the inverted chain adjuster trick that you can do with the wonderful Kawasaki eccentric chain adjusters, which lifted the back of the bike an inch and a bit. All of this made a big difference to the bike’s handling, and my confidence in it.

Also, subsequent to the chat in the pub, I enrolled on a Bike Safe course, which then led me on to do the IAM Skill for life course, which has all helped improve my riding enormously!

One thought on “Tayvallich Bike Trip”