Define your idea of fun. Does it involve some laughing and shouting? Well my idea of fun these days is getting my hands absolutely manky while working on my motorbike. Odd? To a mechanic that’d be work, but for me it’s fun – granted, I probably don’t look like I’m having fun, what with the swearing, aching knees, and general bad temper with anyone daring to distract me..

So last night was fun. Right?

I got the new radiator for the bike on Tuesday evening. Well, I got my mate, Bruce, who lives near(ish!) to the shop to get the radiator, and then I drove over in the car to his place to collect it. I was all set to fit it, when I realised the new radiator didn’t come with the thermostatic fan switch. Dam. That evening was spent in deep depression – I understood that my old radiator would already be winging its way back to the factory in the south of England, and a new fan switch cost around £50!! For a tiny little thing – ridiculous!

Wednesday morning I called Dunfermline Motorcycles – my radiator was still there – relief! Yes, they would get the switch out for me. Yes, Bruce was happy to swing by the shop yet again and collect it for me. What a star!

Wednesday evening we were all going to see my daughter perform in ‘Oliver’ at her High School (fabulous, by the way!) and after I’d deposited the family back home it was time to head over the Clackmannanshire bridge again to collect the bit I needed from Bruce.

When he’d gone to collect the part, it wasn’t out of the radiator yet, so the mechanic there set about removing it, and at that point he noticed a few other bits still on the radiator – minor things like mounting rubbers and metal clips to take the stone guard screws… I reckon there was a discussion about keeping all those little bits back, just to see what I’d say…. Anyway, there was a little bag of bits awaiting me at Bruce’s, but it was far too late once I was home (11:30pm) to start any work on the bike.

Finally Thursday evening arrived, and I set to. The new radiator needed all the little clips, rubbers etc put on it, and the fan bolted on, then it could be fitted to the bike.

Fitting to the bike was straightforward enough, until it came to bolting the radiator to the oil cooler beneath it – that just did not want to line up. That was eventually sorted with the dremel. Now the holes line up!

With everything in place, it was time to pour in the coolant, bleed air out of the coolant pump, and bleed air out of the thermostat housing. With that done it was all sealed up and ready to test. Only the fan switch connection was leaking. Dammit. I got it sealed eventually, just tightening it up a tiny bit at a time. The leaking stopped. Then I fired the bike up and ran it until it warmed up and the fan kicked in. All good, no leaks. Bike off and leave to cool. 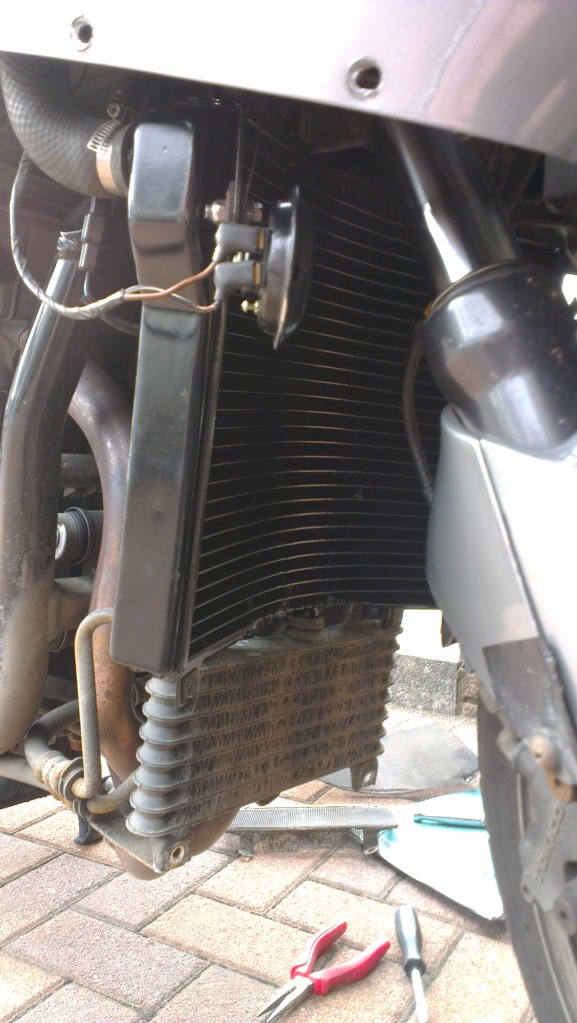 While the bike cooled down I set about fitting the replacement for the burst sports rack – a proper Givi top box bracket – certainly a more serious bit of kit than the sports rack, which looks rather weedy in comparison!

Once the bike was cool enough I could check the coolant levels and pop the fairing back on (I’m getting REALLY good at that!) and the bike was good go at last!

This morning I opened the garage door with some trepidation… I was greeted with a nice dry garage floor – relief!

Riding into work it was a lovely sunny morning and it felt great to be back on the bike.

At lunchtime I nipped out while it was still dry (rain forecast) to again check no suspicious puddles – none.

The ride home was uneventful, and after dinner I set to the bike again – a tiny top up of coolant, probably not really needed, but done anyway. A few other wee items – oil level check and top up and oiled up the speedo cable.

Hopefully that’s the recent run of bad luck with the bike done…. for now…… !

Wednesday evening I rode the bike home only to find when I went to get my bag out of the top box that the rack holding it had broken. In fact I was bloody lucky – the other side of the rack had almost gone too – that would have meant the top box coming off, bouncing down the road and maybe causing an accident – REALLY not good!

I had a lot of Dad duties to take care of, so I rolled the bike into my garage, and got on with it. Once I’d dispensed with collecting kids, cooking dinner, and the swim club taxi run, I could go and get the rack off.

Rolling the bike out of the garage I noticed a suspicious puddle on the floor under the bike. Coolant. Feck.

Stripping the lower fairings off I was expecting to find a cracked hose, or maybe a loose connection. Instead it was the radiator.

Considering the radiator was brand new in February that came as rather a surprise! 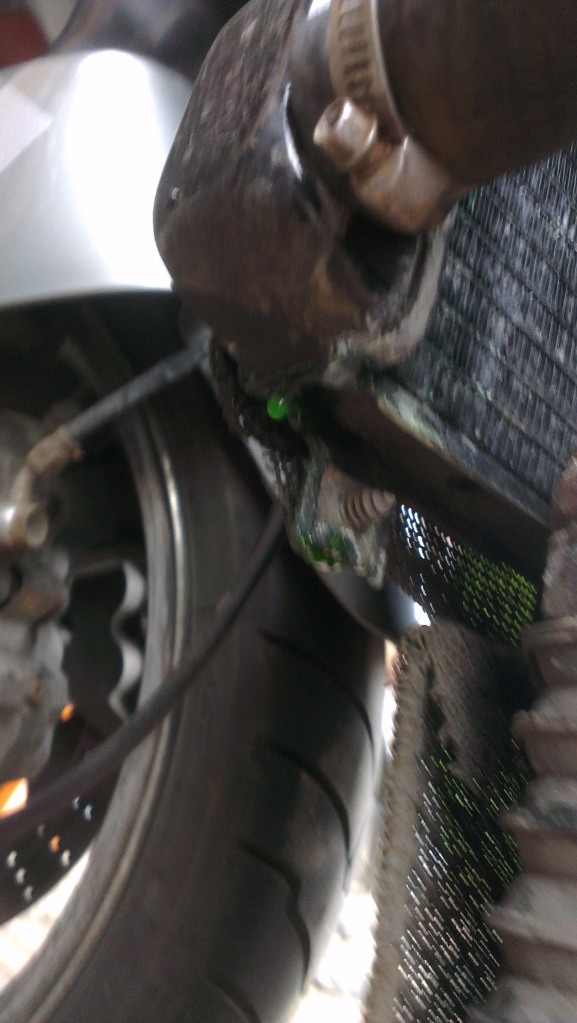 I got in touch with the bike shop that fitted the new radiator – as far as I was concerned the bike wasn’t driveable, the rate of leakage was too high, it was at risk of boiling dry. Only problem being that with their current workload the shop couldn’t get over to me until mid way through the following week, meaning investigation into the fault couldn’t start until then.

Time to get the tools out then. So I whipped the radiator off myself.

Big hole where the rad should be :

I took the radiator over to the bike shop. A quick pressure test, and it’s an element in the radiator core that’s split. Dam. New radiator needed.

The shop called the supplier – a new radiator will be couriered up first thing on Monday, and then we need to work out when/how I can get hold of it… and then of course I need to fit it!

At least I don’t have to buy loads of coolant – I caught all the coolant when I removed the radiator, and filtered it, ready to be bunged back in – hopefully soon!

I leave you with my heath robinson coolant filtration system, involving masking tape, some ply wood, a funnel, some kitchen roll and an empty milk carton! Hi tech…

Oh, and the rack problems – I’ve bitten the bullet and ordered a proper Givi rack to take the top box. Should be a lot safer. And the burst sports rack? Well, thanks to a mate with a welder and talent for fixing stuff, that will be repaired and can be used again, just not for a top box!!!